When seeking out a new spot to live, some might consider a long-abandoned storefront with no existing kitchen or powder room as a hard pass.

Cyd Mello saw it as an exciting opportunity.

A designer with Weisshouse in Shadyside, Mello transformed the former Morningside grocery store into a haven, where a mix of vintage finds and contemporary elements meld in a homage to art, culture and design. Working in collaboration with her mother — Weisshouse owner Stacy Weiss — as well as architect Michael Graybrook and Carpenter Construction, Mello set out to infuse some sparkle into the forgotten gem hiding behind newspaper- and cardboard-covered windows.

“We could see the shining diamond in the rough under the years of different usage and neglect,” says Mello, who lives with husband Neal and their two boys, Finn, 9, and Sonny, 5. 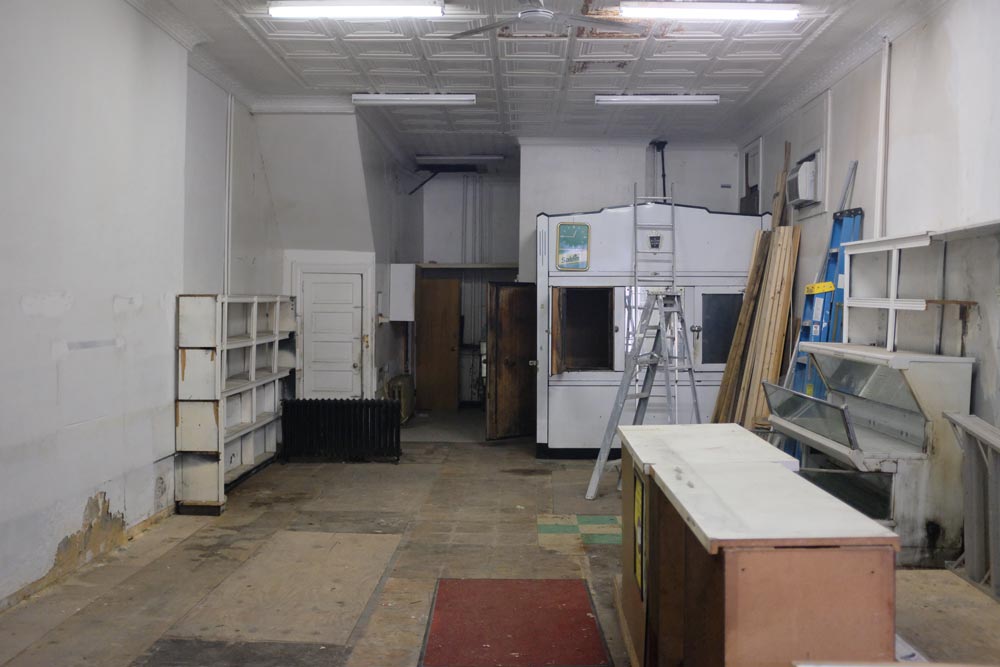 BEFORE: THE STOREFRONT IN MORNINGSIDE WAS LONG ABANDONED BEFORE BEING TRANSFORMED INTO THE MELLO FAMILY HOME.

Unearthing that jewel required a full gutting of the building.

The Wellesley Avenue property, which the Mellos purchased in the spring of 2019, most recently housed Grace Market on the first floor and apartments above. Taking the structure down to the studs gave Mello and the team a blank slate — ideal for an invigorating and edgy update. They started by giving the old brick facade a modern makeover, replacing the doors and windows with black casements. New large storefront windows were added as a reminder of the space’s history, and the original 13-foot-high, pressed-tin ceilings remained in place. 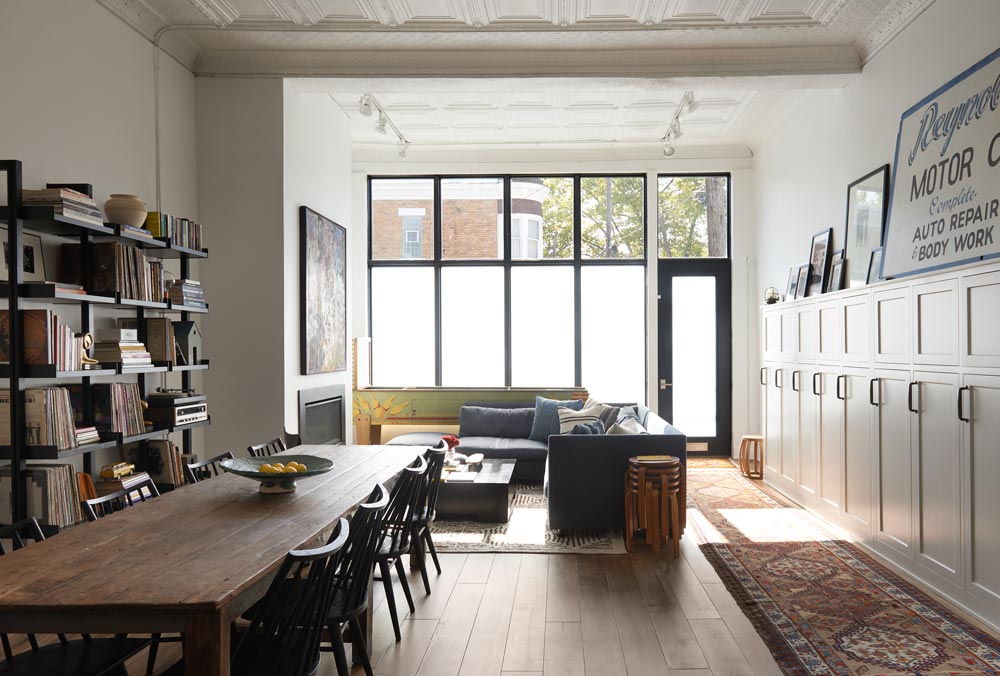 It’s the smaller details, however, that truly give the home its retro-meets-modern vibe. Mello opted for black matte and brass knurled accents throughout and introduced custom touches, most notably a set of storage lockers near the entryway. Artwork abounds, including pieces by her father Karl Mullen and grandfather Jack Weiss, both of whom inspired Mello’s interest in art and design.

Throughout the home, an array of area rugs pull each element of the eclectic mix together.

“We approached the design of my house without a specific plan in mind. I just went with what I loved and let those things inspire me,” Mello says. “I trusted my aesthetic and my decisions so that constant changes didn’t cause the design to suffer.” 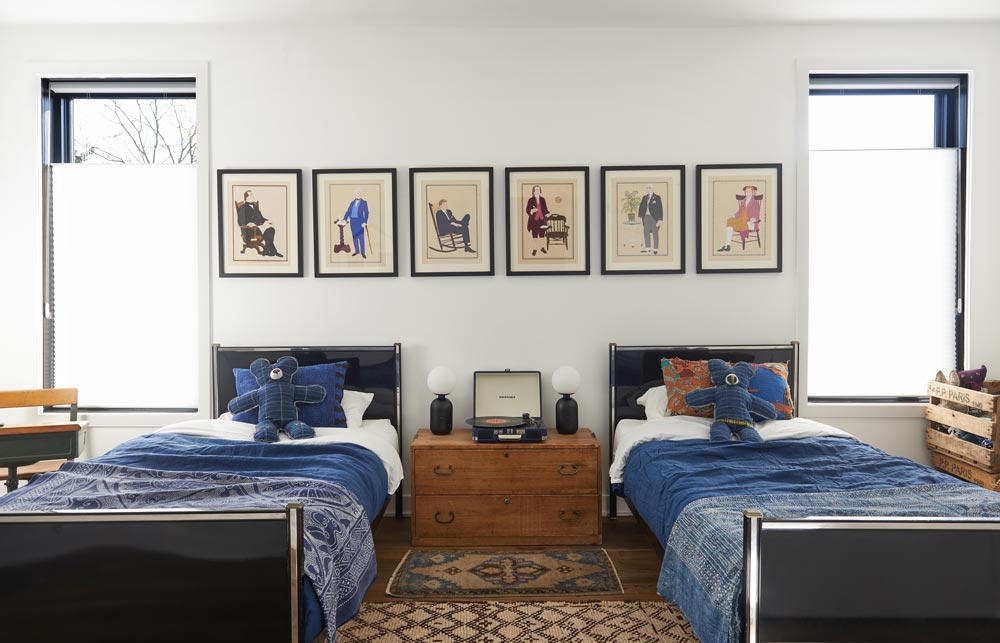 Whether it’s the circa-1947 shuffleboard machine in the living room, the framed posters in the kids’ rooms or the science cabinets used as a dresser in the master bedroom, vintage touches appear in each space. The family’s vinyl record collection, which they’ve been building for years, often doubles as a design detail. The retro touches are not surprising given that Neal Mello owns Mello & Sons, a Lawrenceville shop specializing in vintage clothing and denim.

“Vintage items give our home a bit of soul infused by their history,” says Mello. “There’s a story in the chips and dents or the faded album cover, and it warms our home to imagine what those stories might be.” 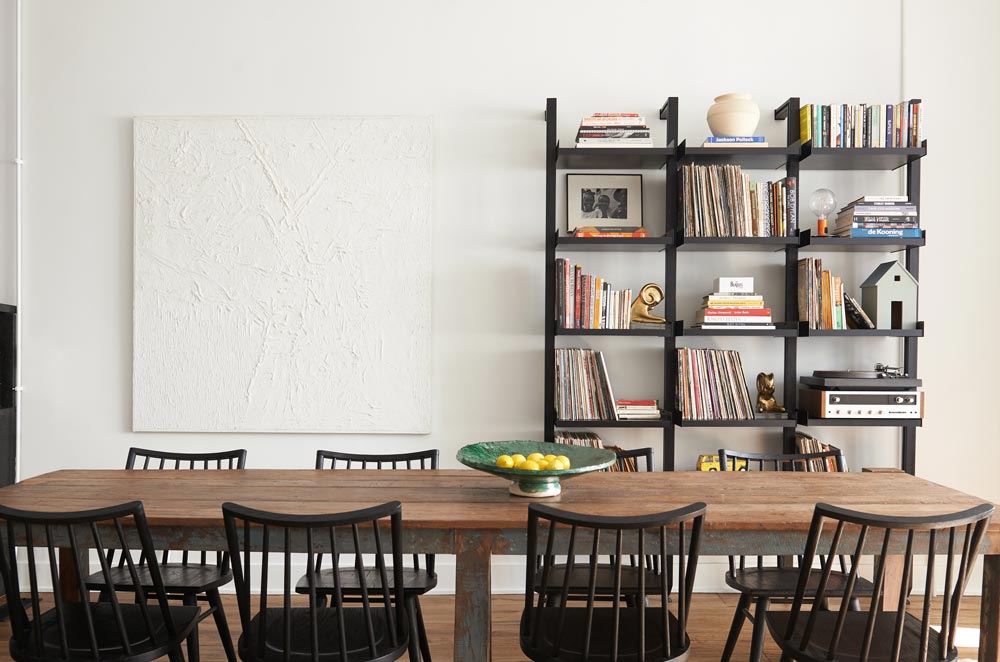 Such items coexist alongside more modern-day touches, including a sectional upholstered in Sunbrella denim, a Cassina Cab Lounge chair, Flos light fixtures, Weisshouse window shades and linear black dining chairs that run the length of a 10-foot-long vintage farm table. It all works together to achieve the desired mix of high and low, iconic and everyday, Mello says.

“We love art and vintage finds just as much as contemporary furniture, so finding the balance between these elements was crucial for our design,” she says. 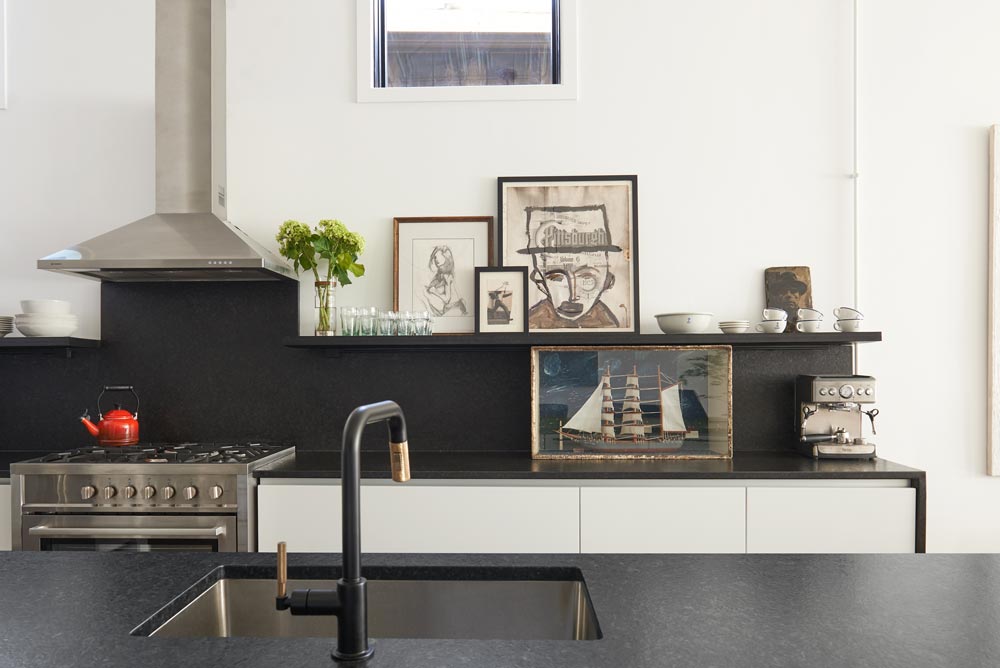 A third-floor apartment was transformed into a primary bedroom suite with exposed beams and large windows; the space offers an open, airy feel. Black-and-white tile in the primary bath allows industrial faucets and knurled vanity hardware to pop. 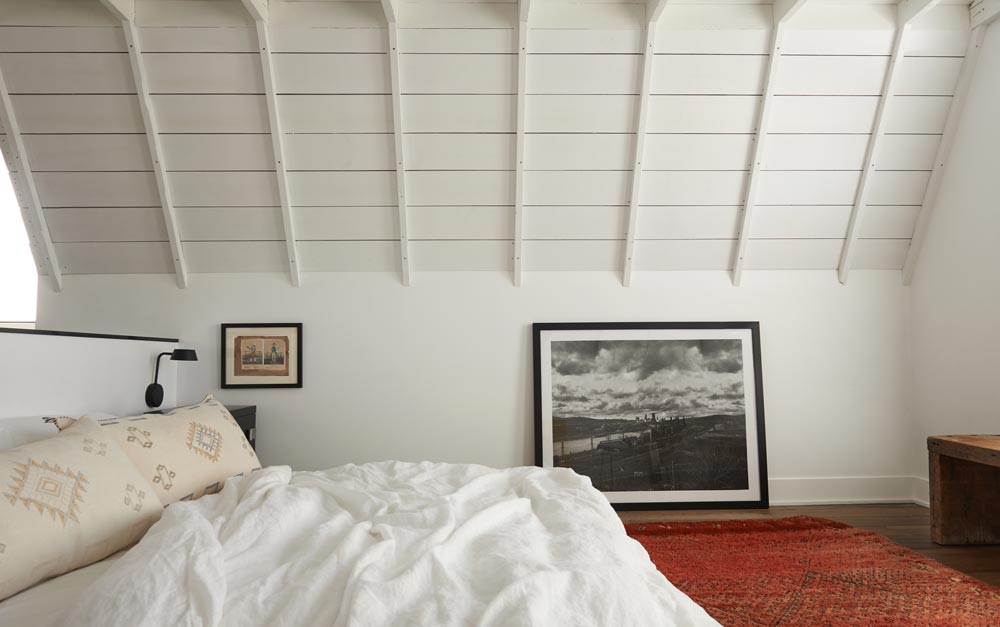 While the remodel did leave the family, who moved into the home last July, with an open-concept floor plan, staying within the specific parameters of the structure presented an occasional challenge.

“We had selected the perfect lighting fixture from Weisshouse for our powder room — however, when it came time to install, we realized the doorway was too small for the light to fit through,” says Mello. “Ingenuity is a lesson you learn quickly when working with old buildings, so we cut the light fixture in half to get it through the door and welded it back together inside the powder room.” 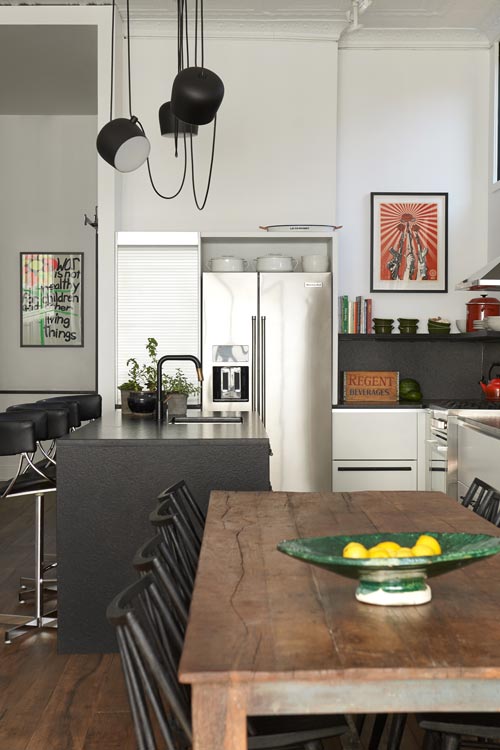 Though she has plenty of previous design experience, this was Mello’s first renovation down to the studs — and her family was essential with their assistance.

Mello notes it’s a job she could not have done without the guidance and expertise of both her mother and her mother’s husband, Will Carpenter, the owner of the aptly named Carpenter Construction.

“Every step of the way, they both took their time to help, teach and challenge me while being open to my direction and decision-making,” Mello says.

Weiss drew inspiration from the building itself — in both the elements they opted to keep and in instances when they had to design against the restrictions of an old structure — and relied on the similar aesthetic and design trust she shares with her daughter to inform her choices.

“I could count on Cyd to interpret my ideas for the house in a fresh, youthful way, which in turn reinforced my designs,” Weiss says. “Even when we had to make decisions without each other, we were confident it was what we both envisioned for the home.”