This story is part of The Best Builders in Dallas 2021 feature. Click here to see the 2021 winners.

A few summers ago, Jen and Ben Coats and their five kids set out on the adventure of a lifetime. Packed in an Airstream motor home, the family of seven clocked 4,000 miles as they cruised the expanse of the American West. But when the epic road trip finally came to an end and the family headed back to the Park Cities—an area known for lot sizes that are the exact opposite of expansive—they started to look at their home in a whole new light. “We were just like, man, these lots are so small,” says Ben, “and you’re so sandwiched up against your neighbors.”

But the Coatses wouldn’t feel cramped for long. As the owner of Coats Homes, Ben has an inside line on available lots in Dallas, and when he laid eyes on a certain half-acre beauty in Bluffview, the veteran homebuilder knew he’d found just what his outdoors-loving family needed. “It had the most mature 40-foot-tall magnolias surrounding almost the entire property, front and back, and we just fell in love,” he says. Thus began a new kind of adventure for Ben and Jen: creating their own custom home. “I build custom homes all the time—that’s what we do—but never for ourselves,” says Ben. “We have done several full gut remodels, but this was our first new build.” 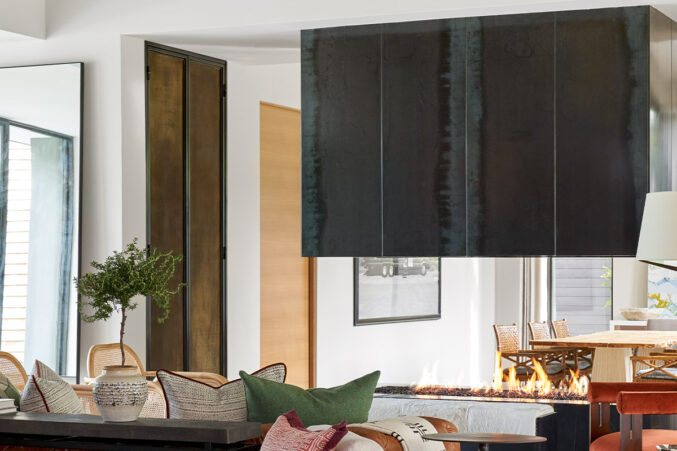 Fabricated by Orona Metal Creations, the suspended steel fireplace separating the family room from the dining room is Ben’s favorite feature in the house. Completely open on all four sides, it appears to float between the spaces.

With the tables turned and Ben sitting in the client seat for a change, he finally had the freedom to build the house that he and his family always wanted—and that meant taking a just-say-no approach to anything trendy. “We wanted our house to stick out in a way that was super thoughtful, super creative, and super custom,” he says. “We wanted people to drive by and slow down and say, ‘Wait a minute. I’ve never seen that before.’ ”

As a result, the Coatses’ 6,800-square-foot house teems with exceptional features, from the exterior clad completely in cedar shingles (more common in Cape Cod than Dallas, Texas) to the family room’s fully open fireplace (“It’s like you have a campfire going,” Ben says). But the family’s dream home wouldn’t have been possible without the ideal team in place, which is why they enlisted longtime collaborator David Stocker of SHM Architects and interior designer Erin Sander. “It’s fun working with Ben,” says Stocker. “He’s probably seen as much as we have, so he’s trying to look for some new things. That’s always inspiring.”

Also inspiring is Ben and Jen’s dedication to clean living, from the food they eat and the bath products they use to the building materials chosen for their home. Inside and out, the couple avoided chemicals whenever possible and used water-based sealants throughout, which limited the number of toxins entering the house. From the exterior shingles and diamond-polished concrete floors to the white oak kitchen cabinetry and white oak ceiling, almost every element was left in its natural state. “It was a win-win to keep a lot of things unstained and unfinished because we liked how they looked, too,” Ben says. 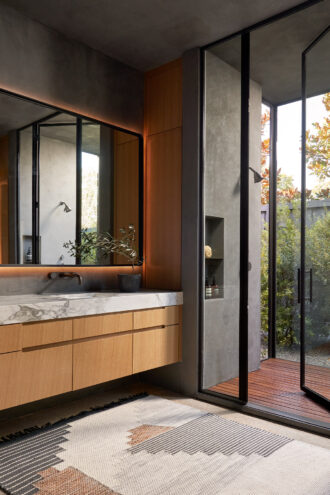 One of the home’s most striking features is the glass-walled shower in the primary bathroom. 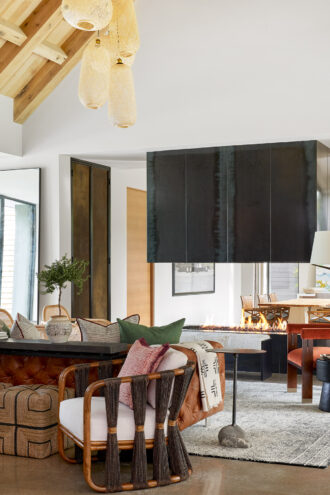 Fabricated by Orona Metal Creations, the suspended steel fireplace separating the family room from the dining room is Ben’s favorite feature in the house. Completely open on all four sides, it appears to float between the spaces.

Speaking of looks, the home’s interiors needed to strike the perfect balance between family-friendly comfort and elevated contemporary. During the day, the hardworking house serves as an off-site meeting place for Ben, as well as a homeschooling zone for Jen and the kids, who range in age from 4 to 11. Then, at night, it’s a place for the family to entertain friends or relax with a home-cooked meal and a movie. “They love the richness and organic qualities of a lot of wood tones on the interior,” says Sander, “but then balancing it with a little bit of that edgy, modern sensibility in some of the fixtures and lighting.” Cozy and chic come together most notably in the office, where Sander mixed a shapely felt pendant and tree root coffee table with a custom sofa in a durable, neutral fabric. Featuring ridged walnut cubes, the room’s wall-sized metal shelves, another custom design by Sander, pop against the polished plaster walls and ceiling.

These creative custom touches paired with the home’s bold architectural moves and unexpected material choices make the Coats house a shining example of the magic that can happen when talent and fearlessness combine. “At the end of the day we got to push the envelope,” says Ben. “And we were not afraid to go big or go home.” 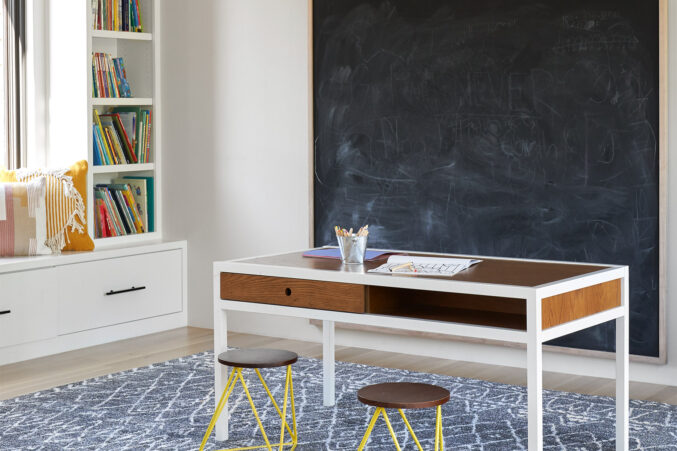 Combining work and play, the gameroom is where Jen homeschools all five children.

Considering building your own dream house? Based on his professional—and, now, personal—experience, Ben Coats has some lessons to teach you.

Be true to you. “Specializing a home for your family is important. That’s the reason you’re building a custom home, to make it uniquely yours,” Ben says. “Sometimes it’s appropriate to throw resale out the window if you know you’re going to live in your home forever. So do what’s best for you and your family and how you want your family to live, not what’s best for the marketplace.”

Determine what spaces you really need. “The biggest thing that we’ve learned is that we don’t use several of our bedrooms,” he says. “So as you’re thinking about designing a home, really take a good hard look at what spaces you’re going to use on a daily basis. And if you aren’t going to use it on a daily basis, consider combining two rooms that aren’t going to be used often into one space so that you’re getting more utilization out of that room.”

Get your team built early. “The sooner the better,” says Ben. “You can get more out of a project when you hire your designer day one. I brought on my landscape architect [Paper Kites Studio] a little bit later in the project, and I think there are things she could have done with the actual architecture to accentuate some of the landscape architecture features—because the house parameters and foundation were already set on the plans—so that’s one that I didn’t take my own advice.”

And be sure to build the right team. “We always tell clients when you’re hiring an architect or designer, you want to look for three things,” he says. “You want to get along with them and enjoy them as people. You want to make sure that their budget is aligned with your budget and that they can accomplish your financial goals. And that your styles are aligned.”