Many visitors to Aminah Robinson’s small house said that you could barely move inside. Every room, every surface, was covered in artwork, books, and found objects. She slept on the living room couch. Robinson worked in a variety of media each day. She would start at four in the morning painting watercolor studies in the basement, then sewed cloth tapestries in the living room, and later illustrated her journals in her writing room, the size of a closet. Neighbors would bring her buttons, cloth, and other materials that she would weave into art for her community and the world.

When Curator Deidre Hamlar first entered Robinson’s house she was overwhelmed. “The artwork was everywhere,” says Hamlar. “ She curated every corner of that house. You could see everything was carefully selected and chosen and placed, so that when she looked, she was inspired. You could tell her house was her muse.”

When Co-curator Carol Genshaft first went into the house after Robinson passed, she found many large artworks that she had never seen. Then she discovered a small, beaded packet about the size of your hand. It was called History of African American Women.

Genshaft says the packet had “had probably forty to fifty little pieces of homemade paper dyed blue. And about twenty of them had drawings on them and some of them were of famous people like Sojourner Truth and Gwendolyn Brooks. But others were of her family, like there was one of her mother. And they’re beautiful little drawings. But then what was so striking was that there were about twenty or thirty blank pieces of this homemade paper that had names on them, and I’m sure she intended to someday come back to this project.” 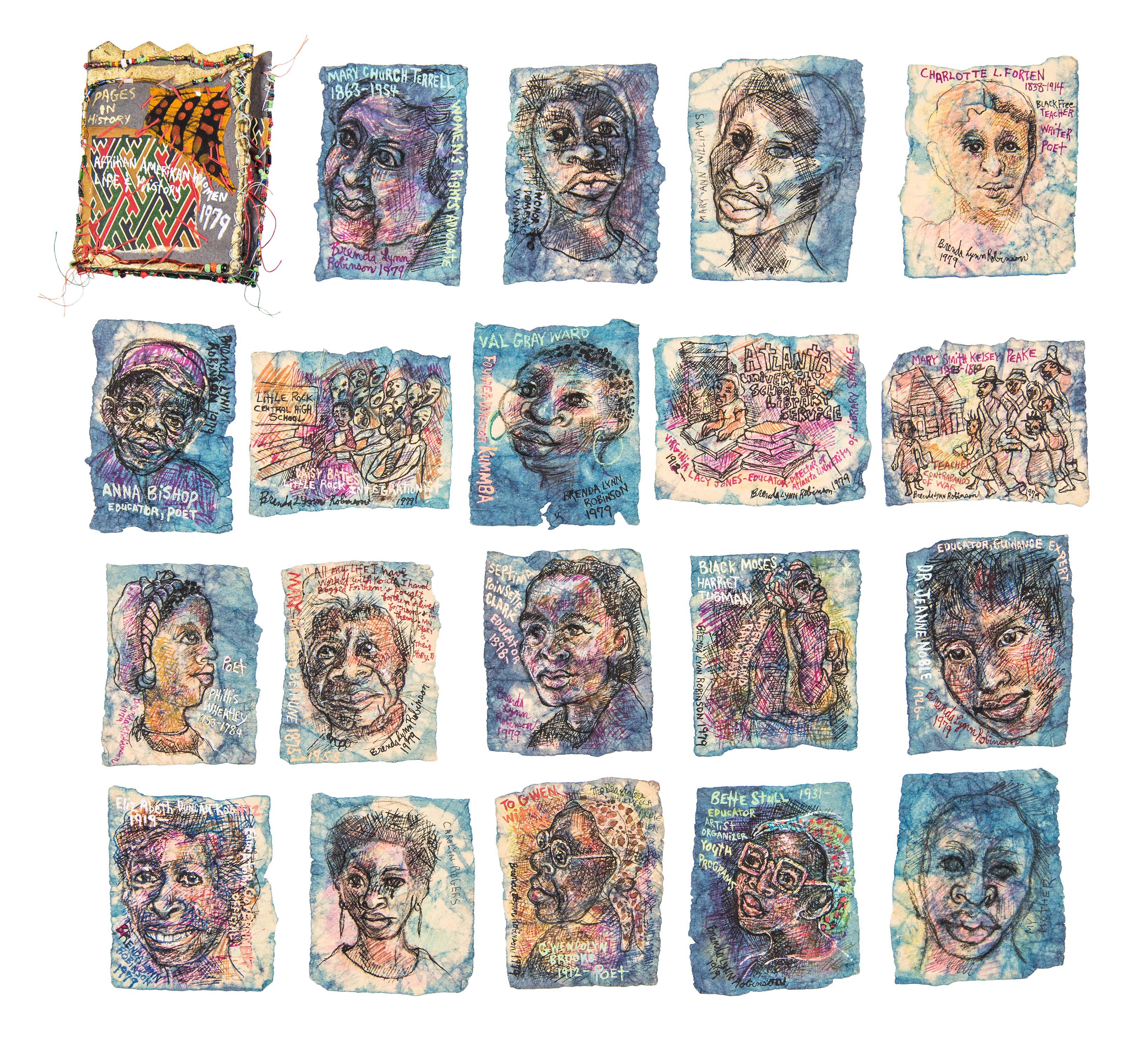 Carol Genshaft talked to many of Robinson’s neighbors and visitors from the art world about Aminah’s home. “Often the word that came up was sacred,” says Genshaft. “It was this sacred space, but when you were in that space, you knew you were in the presence of a different way of seeing the world.”

Brian Moss feels Aminah’s sprit in the home even now. He is a painter and comic book artist who learned from Robinson over many years. Moss lived in the house during 2020 as its caretaker. Moss says Robinson’s sprit is “definitely here. That’s not a question, and benevolent and very positive. So let’s just be frank about it because someone is going to ask “is she in the house?” Yes, she hasn’t left the house at all.”

Moss felt Robinson’s presence when he painted alongside her art materials in her studio. Each day when he returned from his afternoon break, he noticed that a brush in one of her paint cans had moved to the other side of the can. He describes the experience this way: “There’s this brush that would sit on her thing, and it would always point forward like this, and I would always adjust it and put it back, and it would always go forward like that. Like this is like a daily thing, right. I take it as “good job.”

Moss lived in Robinson’s house during the Covid shutdown. The museum commissioned him to create a graphic book about the experience. His mentorship with Robinson continued as he read her books, absorbed her artwork on the walls, and cooked in her kitchen painted with line drawings on all the cabinets. Moss noticed that he was picking up some of Robinson’s visual language in his own style and creative process. “I started working more directly. So I stopped penciling first; I just start inking. And you’re like learning like, okay, she did this, so let me try that, and oh, well that worked. I feel more confident.” 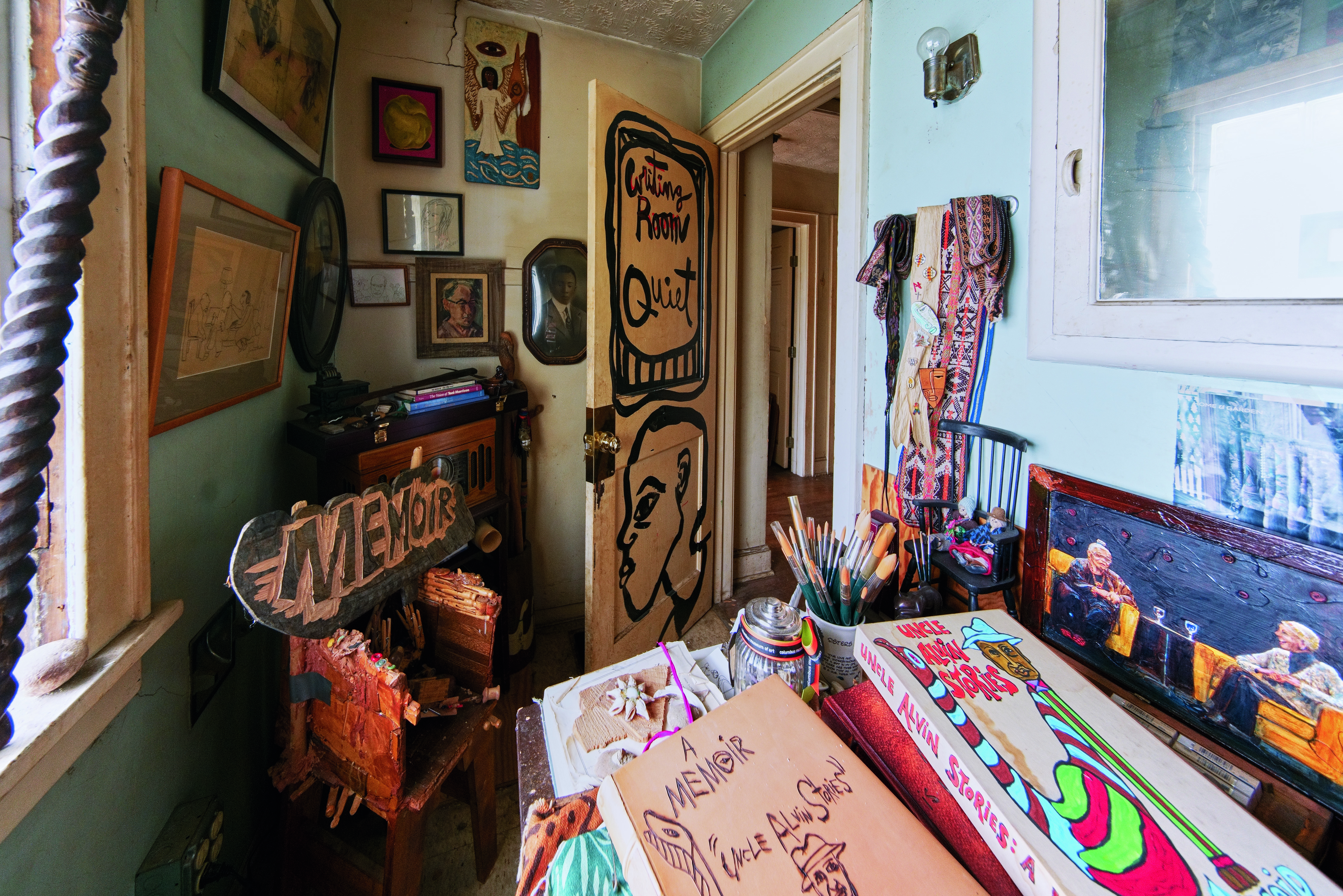 The museum is now offering the house to African American artists in residence like Moss. The neighborhood has not changed since Robinson lived in the house. Regarding the neighborhood, Moss asks these questions: “Please tell me why we have a railroad behind me, a freeway on the other side, and in these busy intersections, along with an Amazon warehouse down the road, but there’s no grocery store, right?”

Moss believes these realities of place will influence artists in residence. He says, “So these are the kind of things that artists are keen to that they’re going to pick up on depending on your outlook and your exploration of the neighborhood and what you can add to that as an artist and how that can impact and help this community and continue what Aminah started.”

You can see many of the art objects from the house in the museum show, Raggin’ On until October. To visit the exhibit, see https://www.columbusmuseum.org/raggin-on-the-art-of-aminah-brenda-lynn-robinsons-house-and-journals/website.

Culture Couch is created at the Eichelberger Center for Community Voices at WYSO.