There’s a refrain Bradley Smith hears whenever he invites people to meet him in the Town of Williamston.

“Any time I’ve brought someone here — from Greenville, from Anderson, from Simpsonville or elsewhere — they almost all say the same thing,” said Smith, who works as a real estate broker with Cross Creek Realty. “They say: ‘You know, it only took me 20 minutes to get here.’”

That easy access is one of the many factors driving a new partnership between Smith and the town, which aims to bring modern amenities to a place of historic charm.

The development, which has yet to go before town council, will be multi-faceted. A former water treatment plant could be converted into a brewery, restaurant or similar concept (no tenant is currently in place). An amphitheater would be set up for outdoor concerts. Comfortable green space would be preserved. Walking trails would connect the former water treatment plant location to the town’s main park. And a new subdivision of 63 homes downtown, spearheaded by Hunter Quinn Homes, will be built to blend into the town’s historic character.

“When I got to Williamston, I fell in love,” Smith said. “That’s why, with this project, we wanted to make sure it was the right development to create and emphasize the atmosphere that Williamston already brings to the table.”

Despite, or perhaps because of, its proximity to more populated areas, the town of Williamston is often overlooked. Quietly situated in northeastern Anderson County, right between the cities of Anderson and Greenville, Williamston’s residents usually work somewhere other than Williamston.

“We’re more or less a bedroom community,” said Williamston Mayor Rockey Burgess. “A majority of our residents work in fairly good-paying jobs outside of the community. But what makes Williamston attractive is our amenities.”

Amenities like the town’s Mineral Spring Park, which holds the distinction of being the third oldest public park in the nation (some Williamston residents will debate that point, adamant that the park is actually the oldest park in the country). Named for the natural spring that sits on the land, the park is just off the town’s historic Main Street, which resembles the kind of old-fashioned town drag from a Norman Rockwell painting.

Snaking out of the park is the Mineral Spring Trail, which runs for about a mile along the waters of Big Creek before looping back through a tunnel beneath Main Street that leads to recreation areas where kids play baseball, softball, soccer and football. 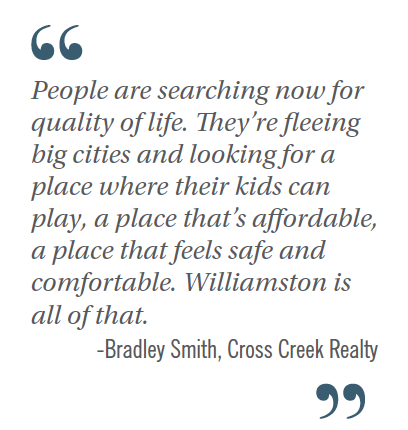 On summer nights, residents stroll down Main Street, lounge in the park, play in the fields.

It’s the kind of ease and walkability that seems the work of a modern urban planner and yet, Williamston’s character came about naturally.

For Smith and Cross Creek Realty, the appeal of Williamston was obvious.

“People are searching now for quality of life,” Smith said. “They’re fleeing big cities and looking for a place where their kids can play, a place that’s affordable, a place that feels safe and comfortable. Williamston is all of that.”

A major development like the one Smith has planned would not be possible without a similarly community-oriented approach, which is why bringing together the right stakeholders was key, Smith said.

Williamston may be a “bedroom community,” but it is by no means a drive-through town. Unlike other smaller cities and towns that are close to larger metro areas, the town already has an established downtown area and specific character.

The property just off Brock Lane on which the development will sit, once the site of a Milliken plant, is owned by the town, which has allowed for a collaborative approach between Smith, Hunter Quinn and the town.

For Burgess and other town leaders, that partnership will allow the town to grow more deliberately.

“I’d say 95% of residents want to see growth in the town, but they want to see good growth,” Burgess said. “Not row homes, big box stores and all that — they want control.” 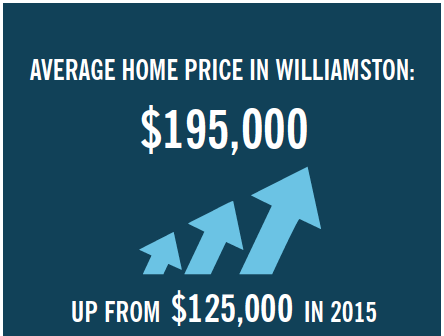 The subdivision from Hunter Quinn, which is slated to be complete within two years, will consist of half ranch-style, age-targeted homes ideal for older residents, and half family-style homes ideal for those with young children.

“One really strong thing about Williamston that I think is overlooked by a lot of folks is that everybody wants to go to Powdersville for the school district. Well, you’re in the same district here,” said Marshal Crown, land acquisition and development manager with Hunter Quinn. “Every school here from elementary to middle to high school is an 8 or better out of 10. That’s really not common.”

Crown said the homes will be built to blend in with historic nature of the downtown, with a focus on maintaining a multigenerational appeal.

“I think when you have a good range of housing choices, you’re really nurturing that sense of community,” he said. 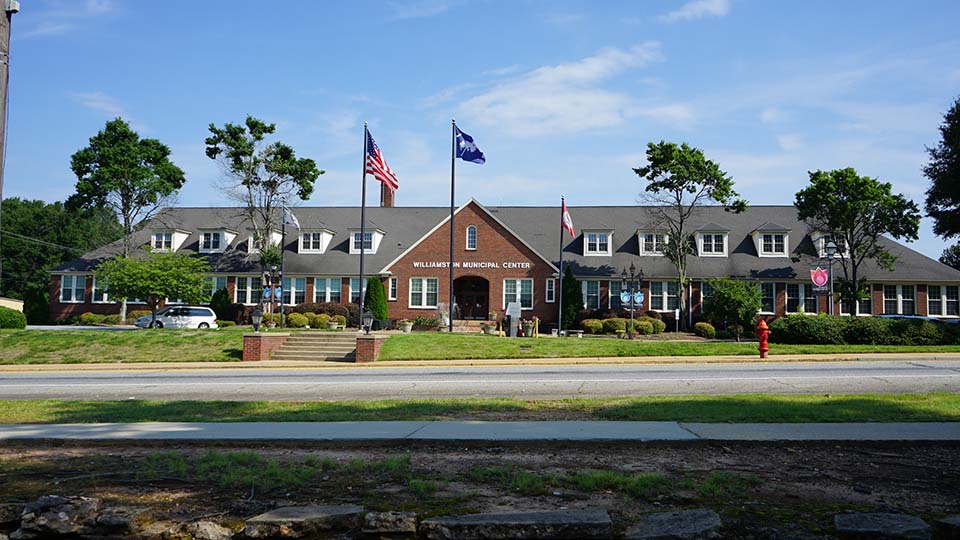 The transformation of the water treatment plant, once approved by the town’s planning commission and town council, would begin sometime this year. Smith is still looking for an ideal tenant to occupy the space, but he’s been in talks with brewery owners who adhere to a hyper-local philosophy.

“That local, unique focus is what this is all about,” Smith said. “We already have this quaint, charming downtown, where there will be coffee shops and restaurants and bakeries and a trail system that already exists. I don’t see this town being turned into cookie cutter subdivisions any time soon.”