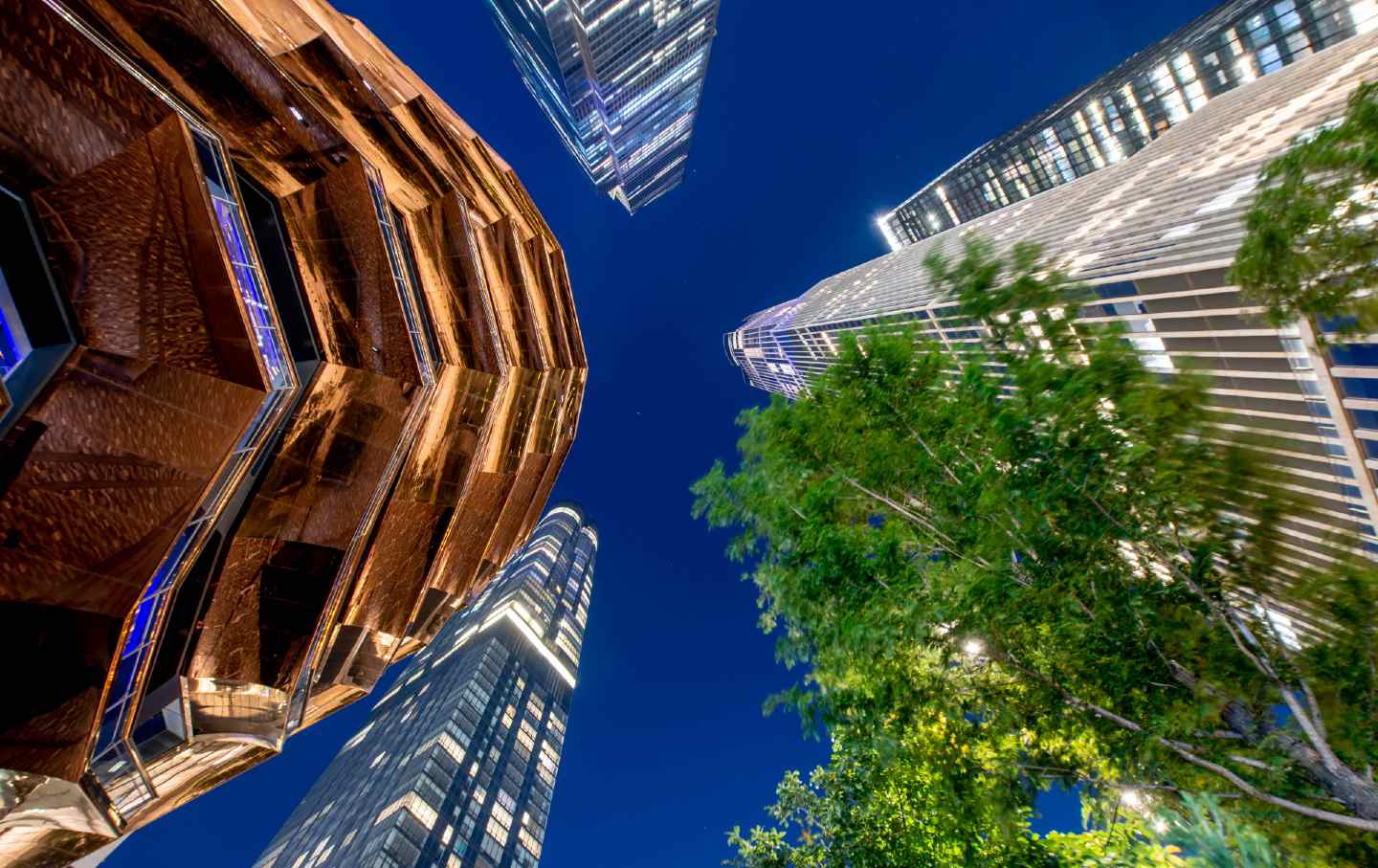 Thank you for signing up for The Nation’s weekly newsletter.

Thank you for signing up. For more from The Nation, check out our latest issue.

The Nation is reader supported: Chip in $10 or more to help us continue to write about the issues that matter.

Did you know you can support The Nation by drinking wine?

This may be the year when we finally come face to face with ourselves and just say it: New York really is a city of 8 million people so desperate for an apartment they are willing to make massive offerings at the altar of big real estate to get one.

Perhaps that’s why not one of the dozen or so candidates who will feature in the city’s mayoral primary on June 22 is talking about the obscene luxurification of the city envisioned for the post-pandemic era.

You thought Hudson Yards, the militarized, over-subsidized, ridiculously deluxe crop of towers that loom over the West 30s like an occupying army, was bad?

Now think Hudson Yards on steroids. That would be Governor Andrew Cuomo’s mammoth plan to retool the area around Penn Station with 10 new office buildings, one of them the size of the Empire State Building.

No: It would be the Gowanus rezoning, slated to bring 8,000 new apartments in towers as high as 30 stories to an 82 block area of Brooklyn centered on a toxic superfund site.

No: It would be the $18 billion plan to turn to private investors to fund repairs to the city’s public housing.

Or the 43 story tower announced for the Bronx waterfront at 149th Street and River Avenue.

Or the twin towers proposed for Park Avenue and 125th Street in Harlem.

Or the four super-tall towers recently approved for the water’s edge near Chinatown.

Or the dystopian array of skyscrapers, including the borough’s tallest building (and another one in the works that could be even taller), that already blanket the streets around Queens Plaza.

Data from the NYC department of buildings shows that the number of construction permits issued or renewed, which had dropped almost 17 percent in 2020, is already rebounding in 2021. The stats also show that there are currently 6,130 new construction and major alteration projects ongoing in the city, involving close to 122,000 apartments. Most of the projects mentioned above have not yet gone into construction and so don’t yet appear in the department’s numbers.

A year ago, people vowed that we were all in this together, that New York could never return to the inequitable, unjust, unsustainable bad old days. One pandemic-related lockdown later it’s Let’s Make a Mega-deal. And the leading mayoral candidates want to double down on this.

Andrew Yang, the businessman and former presidential candidate who’s been atop most polls since he announced his candidacy in January, doesn’t deal in many specifics. But he says he wants to make doing business in the city easier, making it more straightforward for developers to get what they want. Brooklyn Borough President Eric Adams, who’s been neck-and-neck with Yang, has vowed to upzone all of midtown Manhattan between 14th and 42nd streets. He claims this will diversify Manhattan with lower income people of color—but it’s insane to believe that developers, many of whom have backed him with campaign contributions, are going to do this voluntarily. Kathryn Garcia, whose no-nonsense promise to make city bureaucracy more efficient won the endorsements of both The New York Times and the Daily News, supports the privately funded NYCHA blueprint but hasn’t given a broader view of her philosophy regarding real estate.

Nor do the self-proclaimed progressives vying for Gracie Mansion mount a full-throated roar against overdevelopment. City Comptroller Scott Stringer talks about guiding new construction more wisely—targeting tax abatements to affordable housing, requiring one-quarter of all apartments in new developments to be affordable. Activist attorney Maya Wiley suggests building affordable housing on 1,000 acres of vacant city land. And Dianne Morales, who worked for years as a nonprofit housing executive, says she supports prioritizing the needs of the majority of the people in the city in all development schemes (Morales also opposes NYCHA’s private funding plan).

Even Samuel Stein, a senior policy analyst for the Community Service Society who wrote the book about the class warfare underlying NYC’s development deals (Capital City), equivocated when I called him. “It’s less blanket overdevelopment than uneven development,” he told me. For instance, he noted, many well-off neighborhoods—including places many of the mayoral candidates live—are protected via historic districts and low-density zoning while some far-flung communities still have no development at all. Sandwiched in between them are historic communities of color like Crown Heights and East New York, which are rapidly becoming unrecognizable due to an avalanche of new construction.

People fight these deals locally, one at a time. But when it comes to citywide solidarity—bupkis.

Perhaps some of this is down to the fear of a financial meltdown: New York is facing a budget hole—estimated to be $5 billion per year starting in 2022. Meanwhile, the old bogeyman of rising crime (tragically, gun violence has increased in the city since the pandemic started) has taken over the political space.

But there’s something else at work here, a zeitgeist thing, as if the worst talking points of the real estate industry have wormed their way into our brains. “It’s like going against the Vatican,” said activist planner Tom Angotti, who recently retired from teaching urban policy at Hunter College and the City University Graduate Center. “Real estate is God. It’s not only the financial power. It’s the political power.”

Barika Williams, executive director of the Association for Neighborhood & Housing Development, says that members of her group regularly get slammed as “anti-development” agitators, though the word “development” is literally in their name. “We are not saying that the machine of development needs to be dismantled,” she argues. “We are saying the machine that focuses on development for people who are not New Yorkers does.”

For Williams, the big questions of the moment involve “whether or not we’re going to do recovery differently? Are we trying to do a just and shared and equitable recovery?”

To that end, here are three simple ideas that any future mayor should be able to support:

There are still 8 million stories in the naked city and real estate development is only one of them. Let’s keep it that way.