AMES, Iowa — Beans are a staple in nearly every vegetable garden. Edible beans come in many sizes, shapes and colors and include green beans, pinto beans, lima beans, edamame (soybeans), cowpeas, kidney beans and others. While Iowa is known for growing soybeans, there are many other types of beans that grow well in the home garden. In this article, horticulturists with Iowa State University Extension and Outreach answer frequently asked questions about growing beans in the home garden.

How late can I plant green beans?

Green beans (also called snap beans, string beans, or wax beans) are a warm-season vegetable and should be planted after the danger of frost is past. In central Iowa, it’s usually safe to begin planting green beans in early May. If harvested frequently, plants should produce well for several weeks. The last practical date for planting green beans is Aug. 1. 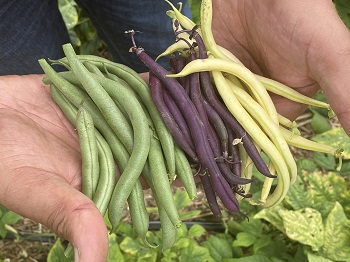 Some of my green beans got too large and bumpy. Are they still edible?

While pods that are large and bumpy are still edible, they are not nearly as tasty. Green beans (also called snap, string, or wax beans) are intended to be consumed as immature pods with small undeveloped seeds inside. When the seeds inside the pod are too large and mature, the bean pod becomes tough and stringy and is not as palatable. The mature bean inside the pod of a green bean can be shelled and used fresh like fava, butter, or broad beans, but the flavor will likely be inferior.

I planted some lima beans this spring, but the plants have produced only a few pods. Why?

In the Midwest, yield is largely determined by weather conditions. Lima beans grow best when temperatures are between 70 and 80 degrees Fahrenheit. They also require 1 inch of water per week (either from rain or irrigation) during blossoming and pod development. Hot, dry conditions during blossoming may cause many of the flowers to drop off without setting pods. Excessive nitrogen fertilization promotes lush growth but may also inhibit pod formation.

Which is more productive, bush or pole green beans?

In general, pole beans are more productive than bush beans simply because they are larger plants. A 10-foot row of bush beans spaced 2 inches apart can be expected to produce between 4 and 5 pounds of green beans, depending on the cultivar and growing conditions. Under the same conditions, a 10-foot row of pole beans spaced 4 inches apart (gardeners typically space pole beans wider than bush) can be expected to produce approximately 8 pounds of green beans, depending on variety. Planting pole beans seems like an obvious choice since you can sow less seed and get more green beans. But bush beans have the great advantage of not requiring a trellis, teepee, or other form of support to be built, reducing material costs, labor and time spent in the garden.

Will my pole beans cross-pollinate with nearby soybeans?

If you do have two varieties of bean in the same genus that you are worried about cross-pollinating because you plan to save the seed for planting next year, planting the different varieties 10 feet apart is all that is needed to prevent nearly all potential for cross-pollination.