AMES, Iowa — The large, showy blooms of lilies add colorful elegance to the summer landscape. While many plants are called “lily,” plants such as daylily, calla lily, surprise lily or water lily are not “true lilies.” True lilies are members of the genus Lilium. Many types of lilies are great for almost any garden situation. In this article, horticulturalists with Iowa State University Extension and Outreach answer questions about growing lilies in your garden.

What types of lilies are commonly grown in Iowa? 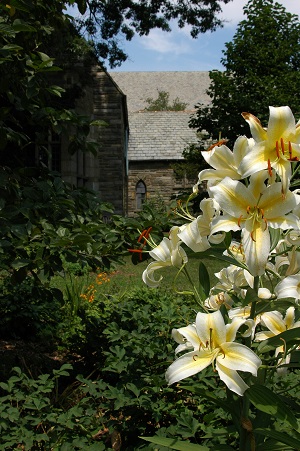 Several types of lilies do well in Iowa gardens. By planting some from each of the different types, you can have lilies in bloom for most of the summer. The popular Asiatic lilies have flowers that face up or outward and cultivars are available in just about every color but true blue. Blooms open in early summer on top of stems that range from 2 to 5 feet tall. They grow and multiply quickly but are not as fragrant as other types of lilies.

Oriental lilies have large, fragrant blooms in mid to late summer in whites, pinks and crimsons. The flowers typically face out or nod downward and are often spotted or edged in dark contrasting colors. Their tall 3-to-6-foot stems sometimes need a little extra support, especially if placed in areas that receive strong winds.

Trumpet lilies bloom in mid-summer and are noted for their spotless, fused petals that form a trumpet shape. The highly fragrant, outward-facing flowers are available primarily in white, yellow and pale pink. Plants need protection from the wind or staking because they grow 3 to 8 feet tall. Often these lilies are short-lived in Iowa.

Martagon lilies, sometimes referred to as Turk’s cap lilies, have nodding flowers in white, purplish red, yellow, orange or pink and are often spotted or freckled. The stems have distinctive whorls of leaves and reach 4 to 5 feet tall. A woodland native, this is one of the few lilies that prefers part shade.

When is the best time to plant lilies?

Early fall is also the best time to dig and divide lilies. Carefully dig up the clump and separate the bulbs. Replant the bulbs immediately. If planting must be delayed, place the bulbs in a plastic bag containing lightly moistened sphagnum peat moss and place the bag in the refrigerator. Plant the bulbs as soon as possible.

What is a good planting site for lilies?

Because of their height, lilies are great additions to the middle or back of the garden. Most lilies perform best in well-drained, slightly acidic soils in full sun. However, Martagon lilies prefer partial shade and neutral to slightly alkaline soils. Good soil drainage is imperative as bulbs may rot in poorly drained, wet soils. Raised beds are a good planting option in poorly drained locations. Mulching is recommended for lilies to keep the soil cool, conserve moisture and prevent weed seed germination.

Can I plant an Easter lily outdoors in my garden after it’s done blooming?

Like other trumpet lilies, Easter lily can be a short-lived addition to the garden. After flowering, place the plant in a bright indoor location and water when needed until temperatures are warm enough in May to plant outside. Choose a well-drained, sunny site. When planting, do not plant it at the same depth as it is in the container. Dig a hole deep enough so the bulb is about 6 inches deep. The original plant will die back several weeks after bloom. Remove the dead growth by cutting it off at ground level. New growth usually emerges by summer. Lucky gardeners may be rewarded with a second bloom in September. Others will have to wait until next June. Easter lilies are not reliably winter hardy in Iowa. However, they often survive and bloom in the garden for a few years if heavily mulched with straw in fall. Remove the mulch in spring.

Yes. In addition to being outstanding garden performers, lilies make excellent cut flowers with a long vase life. When removing flowers to bring inside, be sure that at least half to two-thirds of the stem and foliage remains in the garden to supply the bulb for next year’s blooms. Remove the golden to rust-colored pollen structures or anthers before bringing inside since lily pollen will stain petals, clothing and other materials.

What common pests do lilies have in Iowa?

The primary pests for lilies in Iowa are deer and rabbits. Lilies are a favorite food for deer who will eat the top of the plant, removing the buds and eliminating the potential for flowers that year. Fencing can protect young plants from rabbits and deer but becomes less practical for deer protection when the plants get taller. Excluding deer from the entire garden space with a deer-proof fence or planting lilies in areas deer don’t frequent are often the best management techniques. Smell and taste repellents such as predator urine or capsaicin can be used, especially when plants are in bud, to prevent damage to the flowers, but they will require frequent reapplications.

Lily leaf beetle is a new insect pest in Iowa. Adults are about 1/4 inch long and have a bright red body with a black head and no spots, stripes or markings. The larvae are greenish to orange in color, up to 3/8 inch long and slug-like in appearance. Adults chew holes in the leaves, as well as feed on the stem, flower buds and flowers. The defoliation caused by the lily leaf beetle can severely damage plants. Hand pick and destroy adults, larvae and eggs when noticed on both the upper and lower surfaces of the leaf. Some insecticides are available when hand picking is not practical. When using any pesticide, always read and follow the label.